“Balkan music should make you very happy, drunk and sad”

Georgi Popov is a percussionist from Sofia, Bulgaria, who was part of the MOST Music project as a music manager. We talked with the very open-minded and positive musician about his journey to Cuba, where he learned a lot not just about music, but about the culture, people, and life itself.

Interview by journalist Zsófia Szerda, participant in the MOST Music Management Training programme.

When did you start to play music?

I must have been maybe around 15 years old. I remember my father, who was traveling at this time a lot. He went to the Maldives for some work-related reason, and brought back a really small, almost souvenir-like djembe. I was always influenced by soul, funk and hip-hop music, so I started to jam to my favorite records on the djembe. I had no idea what I was doing. The djembe was so small, it was not even a real instrument, but I loved it. Later, I bought a slightly bigger djembe, which was terrible. You couldn’t tune it and you couldn’t properly execute any kind of sound. Then, a couple of months later, I bought a third one. And finally, I had the real size. I bought a cassette tape with djembe lessons, and started to learn by myself.

You started with funk and soul. What followed?

I started to learn traditional African rhythms more seriously, and I met a French guy, Pascal Guoy, who was playing Afro-cuban congas. When I saw these instruments I was amazed and fell in love. He played on three or four jambes melodies that I have never heard before. I felt that I want to do the same for the rest of my life. When he went back to France, he sold me one conga, and right before he left, he sold the second one, too. So I had two professional congas. A couple of years later I started a course to learn all the conga techniques. My first teacher was also a guy from France who has been traveling to Cuba each year for over a decade, and learned from the best masters. Of course I couldn’t practice in my flat I was renting, so I went out to the riverside to do that.

Did you eventually go to Cuba?

Yes. I was saving for the trip for five years, and two years ago finally had enough money to visit. To go to the source. All I had with me was my backpack. My plan was to stay there 45 days. I didn’t bring my congas, ‘cause the ticket would have been too expensive. I brought one piece of luggage, but in it I had my bike. When I arrived everyone was looking at me like I was crazy when I started to take my bicycle out of my backpack. There was a huge tropical thunderstorm, while I was driving 20 km to the center of the city. Next morning I woke up at 6 o’clock, and went out to get some conga lessons with Rolando Salgado Palacio. And I’ve been doing this for the next 42 days. I didn’t go anywhere. I didn’t do anything but take lessons, and after lessons, go back to my place and practice alone. On the 43rd day I went to the beach, just two days before I had to leave. This was an unbelievable, eye opening experience. 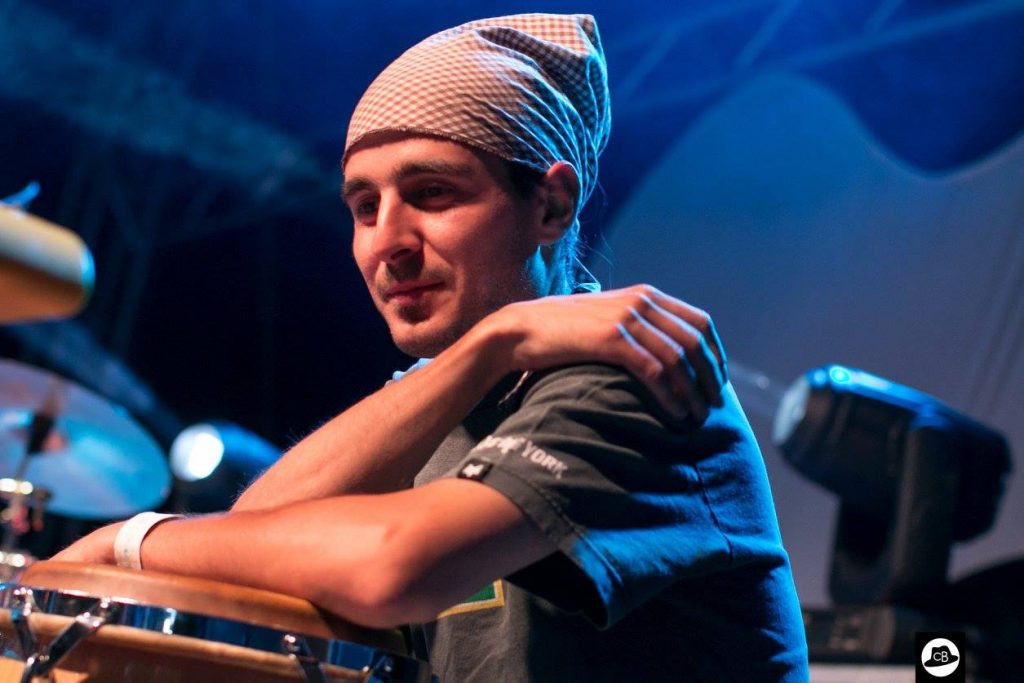 You for sure met plenty of professional musicians there. How did that make you feel?

Two thoughts crossed my mind: one is, OK, I see this young boy jamming on the street, and even if I play every day as much as possible, I will never be able to play as well as he plays right now – and he is only 12. So the second thought came to me: why should I even bother? I will never reach this level. It was super demotivating, but I said to myself: if you really want this, you better get your act together and hit the rehearsal. Luckily I found amazing teachers. Legends. And they gave me so much knowledge… But you can imagine, they saw me like a walking ATM. They didn’t know that I saved five years for this trip – to them, I was European. They thought that I was filled with money.

So your money lasted less than planned?

I will tell you because it is a good story. I had arranged classes with Leo More for a week, but one really recommended teacher I also wanted to learn from asked 450 dollars from me upfront. He was living out of the center in a very shady neighborhood. I wanted to think about it a bit, so we met the next day. During the night I did some research about him, and found out that he is well known and had many students from all around the world. So, I thought, he probably won’t want to damage his reputation for a mere 450 dollars. So I said: man, I’m going to give you my money. Please don’t screw me over. This is all the money I have. We shook hands, and one week later I showed up at this address. I spent 10 days in his house, I was almost out of money and I had 20 more days to go. Since we played all day, we became close as friends as well and he found out that I was a professional cook. So we made a deal: for ten days I will prepare food for us, and he continues to teach me. After these 10 days went by I said that’s it, thank you for everything. He said, what do you mean by that? I have no more money, I said. 50 dollars in my pocket. He said, whatever, come back tomorrow and we continue exactly like we’ve been doing for the last few weeks. So overall I stayed with him for a whole month. I gave money to a complete stranger, not knowing what’s going to happen and ended up with a wonderful mentor figure in my life, and I didn’t really pay that much for it. I was just super lucky. There are many masters in Cuba, but you need to be careful which master you choose. And I think he realized that I was really serious about it. I got into the Cuban vibe really quickly – on my third day I was already riding my bike with no shirt and sandals, living in a shady neighborhood, smoking cigarettes with the prostitutes downstairs. I was living with the locals.

You respected their culture, so they respected you.

Exactly. They opened up knowing that I was not going to mistreat the legacy and the culture of this music. But you have to be serious and have discipline. So basically, when I came back, my technique had improved a lot. I became a better musician in just 45 days. So I was really blessed and very thankful for this journey. After I came back I started to play with different musicians, although I never had classical music education. I still don’t know the notes. This is something that I definitely want to work on this coming winter: to work on this side of music theory because I’m pretty sure this will benefit my music skills overall. I also started a trio, and continued to do music management which has become more and more interesting.

That’s when you applied to the MOST project?

Yes. I had questions in my mind like: How are some bands getting all those gigs abroad, and others don’t? Even if they are good ones. How do they get into festivals? How do you get on the level of major gigs? How do you get signed for a record contract? I started to read about this topic, listen to podcasts, and get all the information I could find. I realized that a huge part of it is networking, how you position yourself. Having high quality photos, a good website, a real stage presence, the way you act after the show, how you communicate with venue owners. All these little things matter. I was lucky enough to get financial support from the National Bulgarian Culture Fund, and then, of course, from MOST Music. So I am on a good path, I think. I learned so much in the last two years, I’m still very far away from considering myself a professional musician or producer, but I’m heading there. MOST Music helped me a lot. I met so many good people in this programme, and also got invited to some festivals with my band – we played in Croatia, Bosnia, and have some more fixed dates in the future. It’s always the personal connection that matters, that’s my experience. If they already know you it is easier for bookers to recommend you to other festivals or concert venues. So that’s the only thing that matters and the way to get gigs and jobs.

But for MOST you applied as a music manager, right?

Yes, although I didn’t completely realize what a musical manager was supposed to do. I remember that my motivational letter wasn’t the standard one. I was thinking out of the box, highlighting how open-minded I am. I wanted to make a good impression, ‘cause I really wanted to be part of this project.

How can you define Balkan music?

It’s very important to separate the two terms considering the geographical region and the style of music. Because what is world music? Literally it is every music that comes from this planet. Right? But it needs to be related to a certain folk tradition, specific regional arrangement or specific instruments or maybe a specific way of singing. I guess people invented the term because they had to define a certain style of music that is not pop, rock, or even jazz, but some type of a fusion based on folk, but the genre of world music is still confusing. But what is Balkan music…? For Balkan music we should have a very strong backbeat. We should have bass. We should have a lot of people getting drunk and getting crazy. And the song after that should be vocals and violins and flutes with slow music that will make you cry. So these are the two sides of Balkan music. When people think of Balkan music they think of Boban Marković, or Goran Bregović. For me, it’s a matter of character, the background and the people who are producing the music. It has to be in your DNA. The beat of your heart. I don’t play Bulgarian folk, but I like to listen to it. It is a communal experience. And that is what makes Balkan music quite unique. The most powerful songs are not the fast ones, but the slow, emotional, gentle ones, that make the hair stand up on your arms. Balkan music should make you extremely happy, drunk and sad.

CALLS ARE OPEN NOW FOR THE 3RD ROUND!

Big news: the last open calls of the MOST Music project are here!  Are you ready to jump start your international career? Read on!

OUR TRAVEL DIARY FROM SKOPJE

We just arrived home to the Budapest headquarter of MOST, but the team already misses Skopje.