„We are little bees, who do everything for their community” 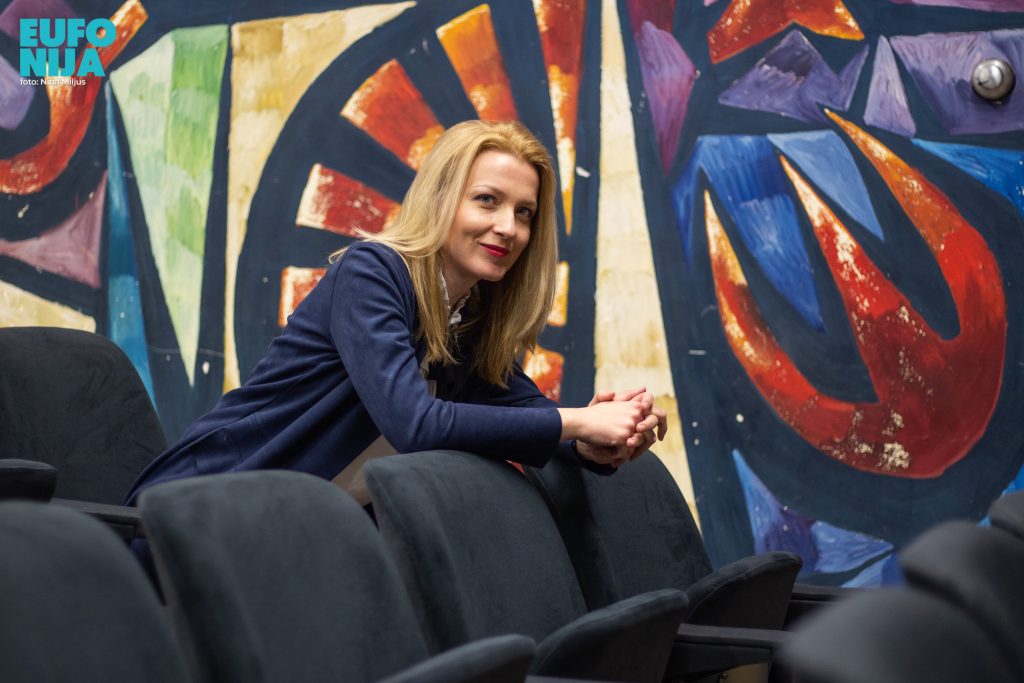 Interview by journalist Zsófia Szerda, participant in the MOST Music Management Training programme.

Dragana Kuzmanovic is an accordionist, playing in several band and theatres, based in Serbia. She is the founder of Eufonija Accordion Festival in Novi Sad. Dragana got involved in MOST Music as a participant of the Management Training pillar. She is a very positive person with a big smile – and high ambitions to make some changes in the field of accordion music.

If you’re like Dragana, you’ll love the MOST Music Managament Training programme, too! The project is meant to financially and professionally support young, aspiring managers, bookers, producers – those guys who do all the practical, organization work around shows. Apply by January 16!

Accordion in Serbia is a common instrument. Did you have someone who played it in your family?

When I was a kid, I heard music I started to dance and sing instantly. I was shaking myself in front of the television. I was born in 1982, so there were no modern technologies in my childhood, only a TV with a button and 3 channels. In that time, I know that my father played the accordion, but when I came to the age when it started to be interesting, my father got a little bored of it.

So why did you choose to learn it anyway?

We had a neighbour, who lived above us. She bought a little red Russian accordion with 16 basses. She played that instrument for long hours, and for me that was something really amazing and interesting. So, I asked my parents to buy me one, too. When my father heard that I want an accordion he was super happy, and he went to a shop in Danube street in Novi Sad, and bought a
brand new Weltmaister accordion with 40 basses. I was looking at that instrument and had no words. It was not small, not red, not the one I wanted. But since I was a good child I said OK, let’s play on this one.

Is it easy to learn to play the accordion?

It is and it is not. It’s not the easiest instrument, because you need to do six operations at the same time. The right hand plays the melody, like the piano, the left has nothing to do with it, it makes the accords on the buttons. Then you need to move the whole instrument, watch the notes and count. Sofia Gubaidulina, a famous composer said she respects the accordion because it is
the only instrument that breathes. It lies on you, and you express all your emotions through it. On the other hand if you love something it is not difficult to learn and practice.

When did you dive deeper into world and ethno music?

For my father accordion was a synonym for ethno music. He played nothing but folk. When I was a teenager, as all the teenagers do, I didn’t care about folk or ethno at all, I listened to heavy metal (hahaha). The accordion appeared in the music schools in the 50s and 60s, and we were fighting our whole life with the fact that accordion players are not only folk musicians. I don’t
even like the name „harmonikaši” (accordionist), because when you say it in Serbia everyone thinks of wedding tents, crazy Balkan parties. But as I get older I find the beauty in our folk music. In Novi Sad it was not cool to play folk on accordion, but in Kragujevac it was quite normal. And let me say, it is not easy to play Serbian folk music at all. It is very complex, and you need to practice a lot. My first connection with ethno music was when I started to play with Bogdan Ranković, who is the founder of Serboplov Band. He is also member of National Orchestra of Vojvodina Radio and TV. He plays his own music. I met him when we played together in the National Theater Fiddler on the roof. I listened him how he plays, we talked a lot, and I just wanted to be part ofhis story. So through his music I found my way to accept and learn about our identity and cultural heritage. I can only say that I am proud to be member of his band.

Then you started the Eufonija Accordion Festival.

As I said, I felt that the accordion players are a bit endangered species in the world of classical music. What really bothered me is that a big percent of those who finished their accordion studies, started teaching right away. There were no platforms where you could play, and the audience of accordion music was small as well. The Eufonija Accordion Festival was founded 6 years ago and that changed the scene considerably. Our young musicians are very successful in the competitions all around the world – they could be the brand of Serbia! Now children have hope that they will be able to do something with their instrument. Another reason why we founded the festival is to show that the accordion is not an orchestral instrument. Although nowadays it is becoming a part of the opera ensemble abroad, it is not a practice in our country. The works written for accordion are chamber or solo works. Now we welcome a new generation of accordion players: turbofolk guys who play fantastically and teach at academies, and with that youthful energy they help the younger generations to remain motivated. We organised Eufonija with the idea to make not only a competition but a platform where we will have concerts and lectures, which is interesting for everybody. We wanted a FESTIVAL.

Who else played on Eufonija that you would love to highlight?

We invite bands, performers who have some new spirit, new energy, and new wave in the fields of accordion music. Like the Frame Orchestra led by Lazar Novkov. accordionist and composer. This year we celebrated the 100 years anniversary of Astor Piazzola, so we made a Tango Quintet and performed his songs. The audience loved it, and not just the experts! Every year we have concerts in the spirit of new Serbian accordion music. We invite local composers to write music for accordion and various orchestras. So, for example, in 2017 we organized the first Serbian concert for accordion and orchestra. It was an event of historical significance, as it was the first piece for accordion and orchestra written by a local composer. In 2022 Novi Sad holds the title of the European Capital of Culture. Connected to that we have the task to make a really good festival, and we’ll dedicate it to women, women in art, the art of women. One part of the programme will be dedicated to Radojka Živković, a famous Serbian accordionist. She wrote songs, played both kolo and folk songs, played all over the world, she was one of the most active  instrumentalists. She played until the age of 90. It is really important to point out that there aren’t many woman accordion players. Because they are in schools, teachnig. So my secret mission is to emphasize the women players in accordion music.

That is one of the reasons why you applied to MOST programme?

Well, yes. I am not sure how I found MOST, probably by accident – although I don’t really believe in coincidences. When I got in, I couldn’t believe it, I was so happy, and amazed with this whole idea. And I met so many wonderful people. When you organise a festival or an event, you are full of energy in the beginning, then you lose some of it, and start to feel nervous and stressed. And when you are in a project like MOST, you realise that you are not alone, it happens to others as well. But they put this aside, and keep on going with huge enthusiasm what I found really inspiring.

I asked everyone during these interviews, so I ask you as well: how would you define Balkan music?

I don’t know. Serbia for example is such a colourful country, so many different nations live here together. In my band in Novi Sad for instance there is a Hungarian guy and my very good friend, Fedor, who doesn’t even know what he is (hahaha). We, Balkan people are a bit different from the others. We have really rich rhythm in our music, and a wide scale of emotions from joy to sadness or to sevdalinkas. For me Balkan music is something special that connects and unites us. And that is why we are full of energy and emotions. And it is this passion why bad and sad thing happened here. We are a passionate nation, and so is our music. But it makes us part of a broader cultural identity. A special kind of people – is Balkan people.

You are an assistant beekeeper, too. What does that mean?

THE WINNERS OF BALKAN MUSIC EXPORT

Congratulations! After careful consideration, the international jury of MOST Music has decided to select 12 bands or artists for Round 2 of MOST Music’s Balkan Music Export pillar.

Happy 2022! Make the MOST of the new year (no, we are not tired of this joke yet) and apply to the MOST Music programme! Let’s see what exactly we are offering and who is eligible! Currently we have open calls for the Management Training and the Festival & Club Exchange programmes. Management Training for […]

“Balkan music should make you very happy, drunk and sad”

Georgi Popov is a percussionist from Sofia, Bulgaria, who was part of the MOST Music project as a music manager. We talked with the very open-minded and positive musician about his journey to Cuba, where he learned a lot not just about music, but about the culture, people, and life itself.  Interview by journalist Zsófia […]